What to do for my Blog?

I am narrowing down what this blog will be about. I think it my dwell on my process of transformation in the coming months. I am beginning to work in a more indirect manner and watching a lot of video and taking a few classes in this direction. Right now I am currently taking from Marc Chatov and completely love his style and color palette. But, I do want my own style. So I find that in the next year I will just be playing around with several techniques I find. Probably moving away from canvas and onto panels, as I bought "a ton" of 1/4 inch 8x4 foot panels, which I can cut to sizes I want and then add the cradles.

I begin with one of my "27 Club" portraits. In this I have Janis Joplin being chased by the horse. Or demon horse. As we all know soon Janis will be "chasing the horse". 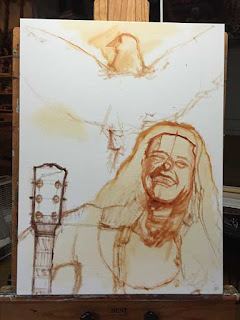 In this first canvas I have roughly sketched in the  images. I used burnt sienna and yellow ocher with a little Gamisol by Gamblin. 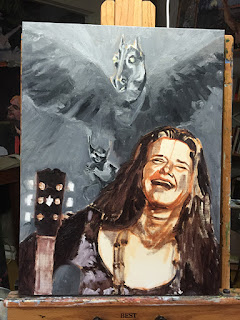 After sketching in, I begin the under painting. A grey grisaille painting is chosen for the background, as this whole section will go very dark. The face, dress and guitar will be warmer so I chose a black made from alizarin, black (my blue) and raw umber (my yellow). This creates a dark purple black.

Now the under painting needs to dry. This will take a few days, especially since I did not use any medium in the paint. The paints in the second stage are from the tubes.  It is lean, but "fatter" than the paint in the first canvas. This should be ready by Saturday to glaze. Indirect painting is slower than direct due to the fact that you are applying glazes. But there is a depth you cannot achieve without it, especially to the darks. Not sure my first attempt will turn out right. But I have indirectly been using glazes for years, just not really knowing it.

Joining this blog or look for blog redirects on my Facebook art page. https://www.facebook.com/artwork.jwilliamhill

Can also find this blog on my website at http://www.jwilliamhill.com.

Posted by J. William Hill artist at 10:35 AM No comments:

The Transition to Romanticism

This week has bee traumatic dealing with my dog and my mailman. Still unresolved. She bit (nipped) him, but he was provoking her. So will see where this goes.

This said I did less studio time this week. Working on paintings of "Tate's Hell" in Bristol, Florida and read less than I usually do.

What I did read was about the transition from Neo-Classic to Romanticism. These artists mostly studied with Jacques Louis David who let this students take great strides in painting and thus many have a different style than he.

The first artist I  will talk about is Antoine-Jean Gros. He was a student of David and in his Napoleon in the Plague House at Jaffa (1804; Musée du Louvre, Paris), we get a first look at the new fashion of Orientalism. This would play into on of the main characteristics of Romanticism; a love of the exotic. In this painting Napoleon is visiting the plague hospital at Jaffa. Not only does he visit he also can be seen touching the shoulder of one of the plague victims. This was commissioned by Napoleon in an attempt to lessen the bad publicity he was getting at the time for having his own soldiers, who had fallen victim to the bubonic plague, poisoned before leaving Egypt. 1 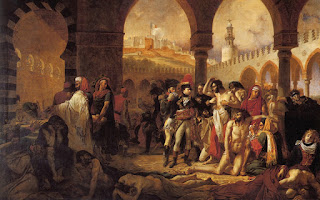 "On his return to Paris in 1801 he exhibited his Sappho at Leucadia (Bayeux Museum), a painting which he had begun in Italy and which, with its theme of suicide, allied to the nocturnal gloom of the landscape, typifies the young painter's Romantic leanings. But his main works were concerned with a different kind of Romanticism."  2 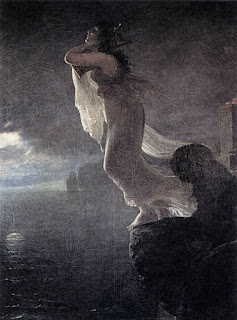 Next week I will look at two more artists that would go on to influence Romanticism and talk about a second characteristic of this style.

A Little Art History for a Monday Night

Each day when I get to my studio the first thing I do is sit down and read. This can range from books on how to sell my art to books on applications or art history. This week I want back to Gardner's "Art Through the Ages". Used this when I went back to Georgia State about ten years ago and am simply re-reading it now.

Up to the Neo-Classical period and David and the French Revolution. Not one of my favorite periods, I tend to enjoy the Romantics which I am about to get into in the next chapter. More into Fuseli, Goya - who I believe his Black Paintings, Salvator Rosa an early romantic from Italy, Gericault a brilliant French painter and W.M. Turner - maybe the Father of Abstract.

So I think on Sundays I will entice you with my great love of art history. Here are a few of the works I really enjoy. Starting with the Neo - Classical artists. I really enjoy the furniture of this period much more than the paintings.


Now we come to some artists I really get into. They are darker and tend to be more complex in my thinking.

Posted by J. William Hill artist at 8:28 PM No comments:

Saturday at the Studio

Today I set out to cut a 48 inch x 96 inch board into three 30 x 40 panels to use for paintings. My studio buddy Vernon Robinson found these twelve oak panels at the building supply down the street and knew this was what I was looking for to paint on. They were 20.00 each and in perfect condition. So instead of heading home, I met him down there and by the time I finished I had the price down to 16.30 per panel. These usually sell for 45.00 a sheet. That made my week Would worry about moving them the next day.

The next day I had John come over and help me move them. Want to guess who did the heavy lifting. Yeah, not me. John was a good sport so I had to take him to breakfast. So here are the pics of that adventure. 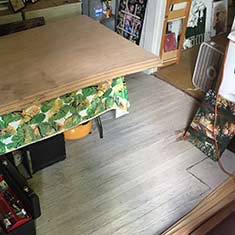 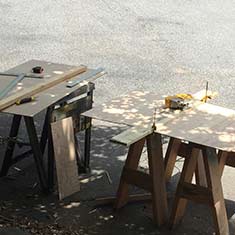 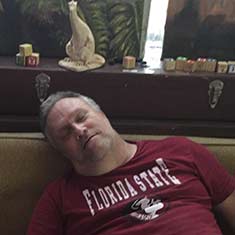 I did sleep well that night and was a little sore the next day.
Next week I'll cut some more and get the cradles attached.

Posted by J. William Hill artist at 6:35 PM No comments:

Friday Night Out with Emma

Friday night and I decided to go gallery hopping with Emma, a friend from Marc Chatov's painting group. We started at the Lowe gallery and saw some incredible faces painted by Fabio Monica. There was also some very decorative collaged shellworks by Claire Begheyn, but as you can tell I fell largely for the heavily painterly works of Fabio's.

Ok, I liked the name too.

Food was incredible and soon we were chased away from the desert table when a waitress took our plates for the second time. 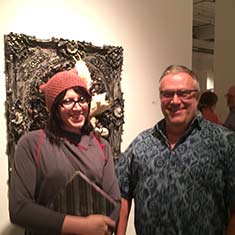 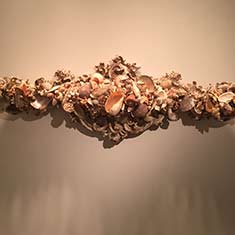 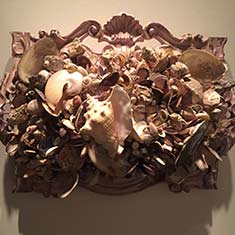 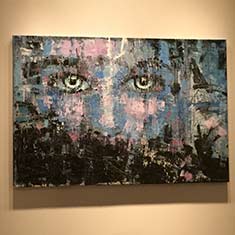 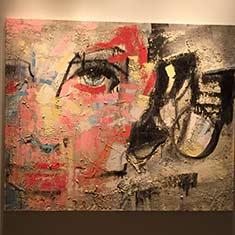 Soon we were on our way to the second gallery. The new opening of the Mason Gallery. We both saw numerous people we knew at this gallery and the art was more representational. So now my friends have gotten me to go out to two galleries this year. My therapist will be so happy.

Probably my favorite that evening was the Fabio works at the Lowe Gallery. The depth and paint was amazing. 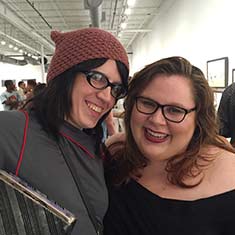 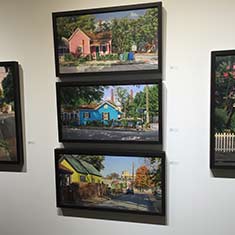 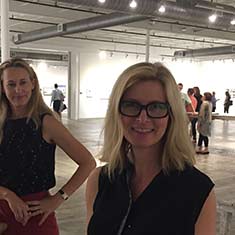 I gave out on Emma after the Mason Gallery. Gosh and to think I used to party all night.  Not anymore tomorrow is learning to cut boards without the use of a table saw or cutting board.

Posted by J. William Hill artist at 6:22 PM No comments:

Thursday in the studio. A Work in Progress.

Thursday was very productive although nothing was finished. May things on the easel but nothing in a finished state.  This is what end of the week looked like. Works in progress.


Tonight I am going to get out and go to a show ... or two, as I promised my therapist.

Oh come on, everyone has a therapist these days. How else could we cope.

Life's just one big mine#&$* (a slang term which describes a work that uses literary devices such as nonlinear storytelling and plot twists in order to present convoluted, yet not conflicting, themes. A creation is usually considered a mind#&$* when a casual observer is not able to discern the true meaning of a work without making a serious attempt to unravel the themes presented or when the plot is incredibly difficult to follow.) That's just how it is.
Posted by J. William Hill artist at 9:52 PM No comments:

Worn out after a full day of painting but had tickets to see Billy Idol. Boy did he get old. But what a great body and kept the crowd entertained. One beer nearly did me in but had fun as we watched the middle aged man in front of us grope his wife the whole two hours. Here are some pics and then on to some works in progress.

Promise I went. Sorry no photo of us together. Someone had to hold the camera.


Posted by J. William Hill artist at 9:26 PM No comments:

Email ThisBlogThis!Share to TwitterShare to FacebookShare to Pinterest
Older Posts Home
Subscribe to: Posts (Atom)
This is a random blog about what I so during the day at The B Complex. From what I am reading to what I am painting and how I am planning to get the word out about my paintings.

J. William Hill artist
Welcome to a look into the happening of an artists daily life.